Using your entire project budget to set your Kickstarter funding goal will make your goal too high. The financially responsible funding goal only covers your remaining costs.

With The One Ring making a big splash on Kickstarter this month, there's been renewed talk of fair funding goals. Free League set its funding goal at 100K SEK (about $12,000 USD), which is unlikely to be enough to cover the costs of producing a full-color, 300+ page book full of art.

Is this too low? Are they gaming the system?

Kickstarter (or perhaps just Kickstarter culture) rewards projects that make their funding goals quickly, which encourages low goals. Funding on the first day (or hour!) is particularly celebrated. It's tempting to set a funding goal that's much lower than the project's budget in order to be able to hit this funding goal very quickly. That success can be used for marketing oomph, building more buzz and sales in a virtuous cycle.

That is.. if you get enough backers. If you don't, have you basically gambled financial disaster to buy some marketing juice?

There are two crucial funding levels, one of which we talk about all the time: break-even point. This is the point a which your project earns enough to cover its costs, and makes its first dollar of profit.

The other funding level is one I don't hear about much, and that's the "go/no-go" funding level. How many sales do you need from your Kickstarter to make continuing to production a good idea?

Intuitively, these are the same amount. Why would you go forward with a project that's going to lose money? Unfortunately, this assumption will make you pick the wrong funding level, one that increases your risks.

The flaw in this thinking is that by the time you Kickstarter, you've already invested a lot. You've probably at least got a first draft, you've put time into play testing, you've spent time lining up the production team, working out some of your logistics, and you've bought enough art to at least give your Kickstarter a chance.

On Kickstarter launch day, there's no way to "unspend" this money.

If your project is unprofitable, you can't go back in time and not do all that pre-work. This has a huge effect on how you set a financially responsible funding level.

What you need to look at is the various scenarios going forward from that point in time, and setting a funding level that guarantees you'll be in better financial shape than you are now. That funding level only covers your remaining costs! Why is this?

To answer that, let's look at hypothetical indie RPG project. I've picked March 1st as my KS launch date, and by that time I estimate that I will have sunk $5,000 into the project. (Let's say this is three weeks of full-time work at a 'livable wage' of $30/hr, plus $1,000 in assorted freelance help such as KS banner art.)

I've priced the book at $30 (including shipping), and it costs me $20 per book to print, package, and ship to backers. The per-book margin is therefore $10.

Let's consider several crappy outcomes. One is that I don't get a single backer. If this happens, I won't fund, and I don't go to production. I pull the plug on the project, and (crucially), I don't spend the additional $5,000 to complete the book.

This means that my total costs are the $5,000 I already put in (and a broken heart).

Clearly, 1000 is not the optimal funding goal.

This is the balance point that matters, when my per-book margin equals my remaining fixed costs.

One way to look at this is to plot my project's final profit based on various funding goals and actual backer levels.

Here is the ideal profit line. 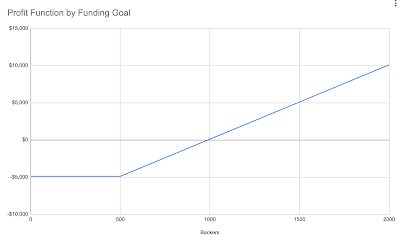 With a funding goal of 500 backers, there is never a point where I'm more exposed than my sunk costs of $5,000. $5,000 in the hole is as bad as it gets. At the same time, as soon as I get even one extra backer past my funding goal, my position is improving.

Let's compare that with other funding goals: 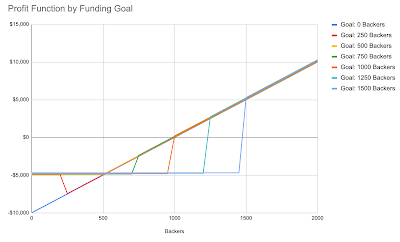 With a funding goal of zero (dark blue line), I've made the choice to spend the additional $5,000 in art costs whether or not I get any sales. This exposes me to some additional downside, as much as $10,000 in the hole if I get no backers.
With a funding goal of 250 backers (red line), I have some protection against the worst, but going into production with 250 sales means my final position is $7500 in the hole, considerably worse than 500 backers.
Now look at funding goals above 500 (e.g. green, orange, teal). Those goals protect me from deepening the hole, but they make it harder to start recouping my costs: it takes many more backers before my project lifts off that -$5,000 profit line. If my funding goal is 1000 and I only get 750 backers, my project doesn't fund. If my goal had been lower, I could have recouped some of my sunk debts, even though my project wasn't profitable overall.

What's interesting about this is that it matches my own gut feel choices while planning my own Kickstarters. I had funding levels that were considerably below the total project budget, because I knew I was going ahead regardless.
With plans to use print on demand, once the book was actually written, there was very little reason not to go ahead with production, especially since post-Kickstarter sales also become available.
Of course, if you have a series of unprofitable books, you need to look at your operation pretty carefully. The time to consider the possibility of turning a profit is before you start sinking time and money into something. When you're hovering over the Launch Kickstarter button, however, very different calculations rule the day.
Michael Prescott at 11:29
Share