As usual when I do maps for +Brendan Davis, he showers me with sketches, documentation and reference images to help me out. It can be a lot to read at times, but it comes in handy when doing 'dungeon dressing'.

In this case, we're doing the Tomb of the Timeless Master, an adventure location for the upcoming Wandering Heroes of Ogre Gate wuxia RPG. It's got a lot of vertical elements - great for isometric or other 3D maps.

Here's part of the sketch Brendan sent me: 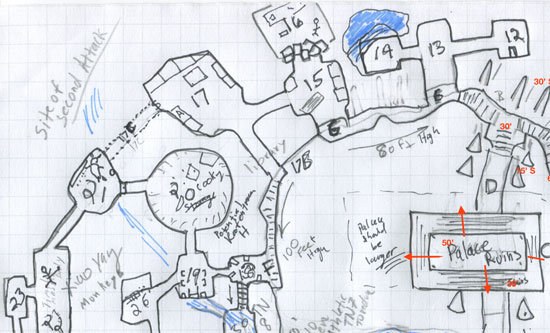 After a bit of back and forth, I knew the altitude of everything, which way the stairs climbed and so on, so I could start thinking about one of the big challenges of doing a 3D map: which angle do you pick to draw it from?

Sometimes you're rendering a location that follows Q*Bert topology. That makes the decision easy: you draw the dungeon from the angle that makes it more or less co-planar with the surface of the paper.

3D Maquettes to the Rescue

Some dungeons just aren't that simple, however, and the Tomb of the Timeless Master is one of them. After staring at it for a while, I realized the only way I was going to figure it out was to play with an actual 3D model of the dungeon.  Time to bust out SketchUp!

One of the great features of SketchUp is that you can import a 2D image to use as a reference. Below, you can see Brendan's original sketch.  I've traced the rooms, then lifted them vertically to the correct height.  Before long, I had a little 3D maquette to experiment with. 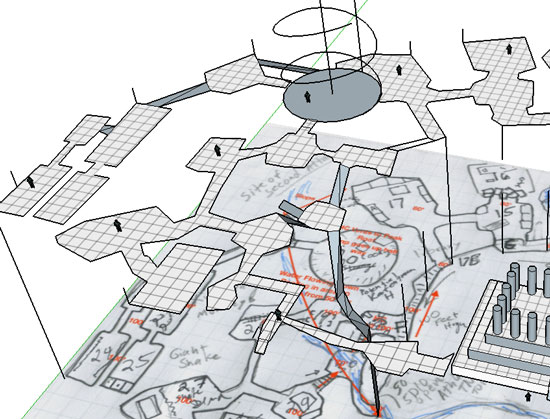 This let me rotate the model this way and that, looking for the angle that presents the dungeon in an interesting way, and with the least number overlapping elements. Some more discussion with Brendan helped here, as he decided to collapse a few stray bits to help it read as clearly as possible.

Cyan Is Your Friend

How to get from here to an illustration? I like to draw at an exaggerated scale, because that helps with the detail. Unfortunately I only have a letter-width printer and scanner.  I decided to do what I did on a previous illustration: to draw it piecemeal, and assemble it digitally.

To this end, I needed a template to make sure that all the pieces fit together properly.  The basic idea is this: print out a reference in non-photocopy blue, draw it, scan it in again, and pull out the blue using Photoshop, leaving a clean illustration for me to assemble.

With a few tweaks to my SketchUp settings, then a bit of adjusting in Photoshop, I had my template. 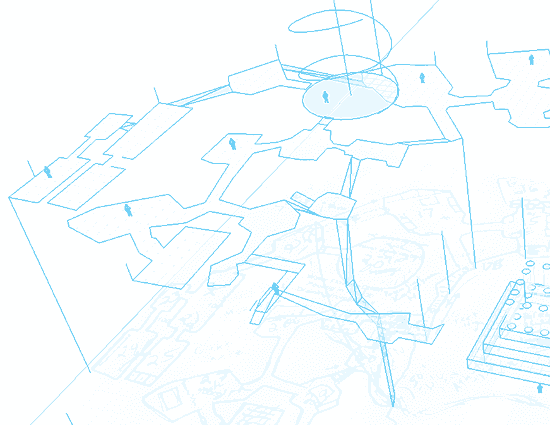 As you might be able to tell, I've actually decided to go with a 3D perspective rendering, not isometric at all. SketchUp makes this easy, and

Working as a mosaic, however, means stitching together pieces of the illustration. Fortunately, the same technique I'm using for the template can work here, too. Where the pieces need to overlap, I can actually just print out the "seams" in blue, connect them by hand, and scan them in again.

Pull out the blue and I'm left with just the new, hand-drawn connection piece (in black), which fits like a puzzle piece with the two halves of the illustration I'm connecting: 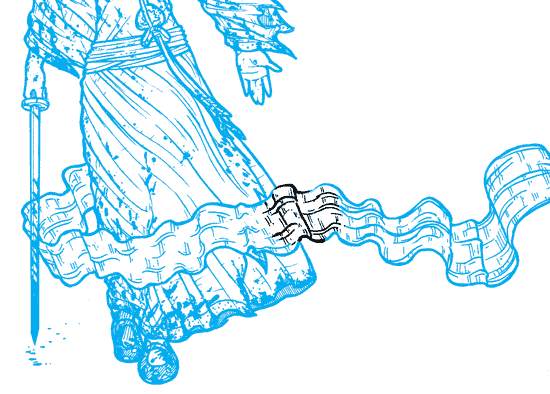 Above, you can see part of the chapter heading illustration from the same book. This image appears in a few variations, which required me to join up a few "alternate" pieces of the illustration.  The woman on the left appears in two different poses, but she needs to connect to the same piece of scarf.

Stay tuned, I'll post the map once it's done!